Forage focus: Would you feed your cattle bread and cake? 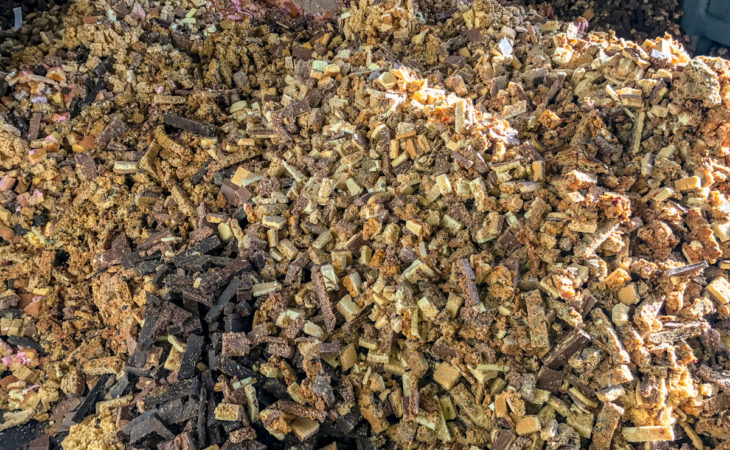 Everyday, in bakeries and mills, bread, cakes and cereals are left on the shelves. However, Sean Tully Animal Feeds takes this surplus food – adds distillers grains and sugar – and produces two animal feed rations; one for beef and one for dairy.

These rations are generally fed with straw or silage and should be supplemented with minerals as appropriate.

From Garbrattan, Co. Cavan, Sean Tully has been using surplus products from the human food chain for many years on his farm. He started feeding brewers grains to his cattle forty years ago.

Over the years, he began to take in breakfast cereals and cakes. However, these products weren’t working well everywhere.

“Some farmers were using a number of products to make a ration, which took up a lot of space. When they ran out of one product, they would increase another. This led to inconsistency and underperformance.”

Sean began to mix the products to produce a consistent and convenient ration. The resulting moist beef ration is 14% protein and the moist dairy ration is 16% protein – both have a dry matter content of 63%.

“These high energy rations are very palatable and increase digestibility and intake, which will inevitably lead to better performance,” he added.

“Our ration is the same everyday. We’re using byproducts, but we adhere to the same regulations as the mills. We use maize meal as well.”

What Goes Into The Ration?

Raymond, Sean’s son, told AgriLand what surplus food is being used in the rations.

The same products go into each ration, but in different quantities.

“We have a number of suppliers. We source our products locally where possible. However, in order to satisfy demand a lot of our bread and breakfast cereal comes in from England.

“We have a specially commissioned and computerised mixer to ensure a consistent mix every time. The feed is made early in the morning; it goes straight onto our own lorries and out to the farmer.”

Raymond explained why the company set up its own lab, adding: “I test all of the rations and the incoming products. Labelling of products is very important to us, and for EU regulations, when we say 14% protein, it is 14% protein.

“Having our own lab ensures that we have same-day results, which is extremely useful in testing incoming products and allowing our product to remain consistent”

“Although we’re using byproducts and surplus foods we are required to adhere to the same regulations and standards as the regular feed mills.”

Sean explained that it took many years to learn how to make the rations correctly.

“It took a long time, with the assistance of long standing, loyal customers who took the time to give us honest feedback on the product, to get it to the level that we’re getting it to now.

“Nobody has got it down to the level that we’re getting it to. Companies in the UK are asking us for advice on how to make these rations.

“It’s not a simple process. When I started, I thought I would go out and mix it and it would be easy. The way you mix it; the rotation in the mix; the time; the products; and when you put the products in; all affect the ration.

Many people can bake a cake, but they don’t all taste the same.

“We have the same level of traceability as the standard feed mills. We only buy from Universal Feed Assurance Scheme (UFAS) approved suppliers in the UK and Ireland. We are Bord Bia and UFAS accredited.

“All of the lorries – that bring product in or out of our company – are approved. We won’t hire unapproved hauliers.”

When asked about importing bread from England and how Irish rations are so important as part of Ireland’s green food image Seán stated: “There are a lot of cereals being imported into this country. The main reason we have to import these products is because they’re not available here.

“Origin Green is about sustainability. Our feed is using surplus and byproducts. If it doesn’t stay within the food chain (human or animal), it will become a waste material. We’re bringing the products into the animal food chain and making very good use of it,” Raymond added.

The rations are mainly sold to large feedlots and dairy farms. Some local farmers also use the rations. This year, Tullys have received enquiries for feed from silage hauliers who are running out of fodder for their customers in the west of Ireland.